Don'ts For Achieving The Perfect Job Interview Look For Women 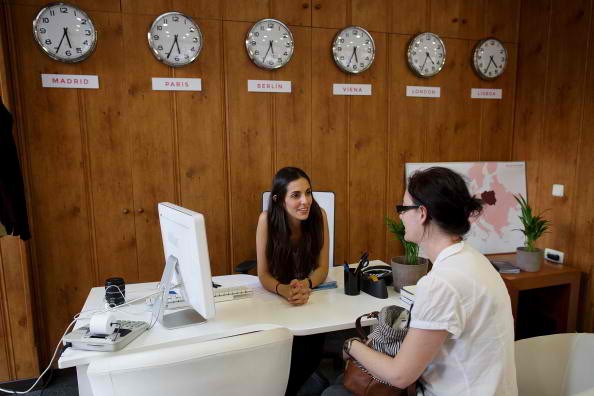 MADRID, SPAIN - APRIL 10: A campaigner (L) assists a woman at the Abortion Travel agency store on April 10, 2014 in Madrid, Spain. The Abortion travel agency store is part of a campaign under the slogan 'Abortion travel, The travel agency that should never exist' in protest against the Spanish Government's plan to change the abortion law. The non-profit agency is an information source only, which will also be available as through an online platform, to inform members of the public on how women could abort legally in other European countries if Mariano Rajoy's government were to change the legislation. The proposed law would outlaw abortions except in cases of rape or where the physical or psychological health of the mother is in danger. (Photo by Pablo Blazquez Dominguez/Getty Images)
(Photo : Pablo Blazquez Dominguez / Stringer)

Creating good impressions is one of the most important things an aspirant must do during a job interview. Aside from accomplishing an effective cover letter and outstanding resume, the aspirant must also convey how professional she is with her outside appearance. That's why it's crucial for a female applicant to also take time to prepare for her job interview outfit as well. Besides, just as stated in the fashion website, Pop Sugar, "When you feel confident about your looks, you'll be able to focus on presenting your qualifications."

So to give every female aspirant ideas on the things one must not do, here are the tips that can help her achieve the perfect look that will enable her to nail an interview:

Don't forget to put the highlight on the eyes

During an interview, it's important to keep an eye contact with the recruiter most of the time. This gesture shows focus and seriousness, two of the characteristics most employers love to see from their candidates. That's why as an aspirant does her makeup, it's crucial to put the emphasis on the eyes. Just make sure to only use water proof makeup set. Smudginess doesn't show professionalism, according to Fustany. And nobody wants that.

When a female wants to look good, some of them tend to go extreme with their makeup. But when it comes to achieving the perfect interview look, less is more beautiful. That's why one must avoid heavy eyeliners and bright colored eye shadows. Heavy, cake-on foundation and overly glossed lips are also a big "no." For the nails, female aspirants should also avoid using bright colors or anything with glitters in it. Remember, the goal for the look is to simply keep everything simple yet sophisticated.

Strong scents might intimidate a recruiter. That's why it's better to choose one that's mild. To know what perfume is best to wear in an interview, aspirants may ask ideas from her family and friends. Better ask for some comments or suggestions regarding what perfume is best to wear for the big day. Or if an aspirant wants to be sure, better not wear any perfume during the job interview anymore.

"Interview beauty can be tricky because you want to make sure you're making a good impression, while still looking natural and chic," as posted in College Fashion, That's why don't just experiment with one's final interview outfit. Instead, consider these tips.

Job Interview Canceled After Woman Inquired About Salary Too Early In The Hiring...

Slay That Job Interview With A Dragon-Slaying Story

2 Reasons To Walk Out Of A Job Interview