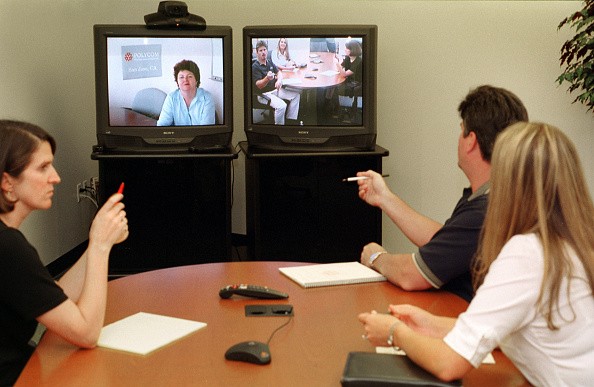 Polycom employees Lesley Philips, Kimberly Klawuhn and Victor Goodrun talk to fellow employee Alicia Morehouse October 3, 2001 on a video conferencing system at the company's Milpitas, California headquarters. The video conferencing company saw a sharp increase in demand for its products after the September 11, 2001 terrorist attacks as companies looked for an alternative to air travel.

Polycom, founded in 1990, was an information technology company that focused on bringing people together.  Now a part of Plantronics, Inc., this company saw tons of rises and fallbacks in its time- and it owes a lot of its success to Andrew Miller.  Although his name isn't as well known as the company, he played an integral part in its growth and helped bring it up from a small business to a company investors wanted to get their hands on.

In 2009 Miller was hired to lead the field operation section of the company.  This job meant overseeing the go-to-market strategy, taking care of sales, channel alliances, and sales engineering organizations.  He spent a year in this role, building an international sales plan from the ground up and focusing on emerging markets like China.  His programs grew sales by 10% across the board.

Polycom saw a 50% growth in domestic sales and 10% in international sales.  The board of directors noticed the incredible work he put in, and because of this, they offered him the role of CEO.  He accepted this position and was eventually offered a place on the board of directors as well.

Hired On As CEO

Miller's work as a CEO worked wonders for Polycom.  He set a lofty goal for the company, aiming to create a business that would be the global go-to for communications work.  By working with others like AT&T, Microsoft, and IBM, he made changes that completely redesigned the company's go-to-market strategy once again.  It was risky to rebrand as early as he did in his career with Polycom, but he made some incredible changes to the company within his four years as CEO.

With Andrew Miller as CEO, Polycom grew over 59% in those last four years.  His dedication and attention to detail raised Polycom from $940M to $1.5B while he was there, and it held that steady increase until he left the company.  Not many can brag about that kind of growth, but he put everything into the business to ensure it got a fair chance to succeed.  Although he doesn't work for the brand since it became part of Plantronics, Inc., he is still the one to thank for how far it went and how fast it grew.

Plantronics was able to buy Polycom for two billion dollars, which shows the company continuously grew and improved off his work even after he was no longer with it.  If he'd never worked on the business, it might still be valued at less than half of that.  The main takeaway everyone should learn from this is that hard work and passion can't be replaced with anything- sometimes a CEO has to overhaul and make changes to ensure its success. In cases like Polycom's, it will pay off in the end.  A little patience, some ingenuity, and a lot of hard work will get any company up to the billion-dollar mark.

Information Communication Technology (ICT) experts are liable for helping associations keep up their computerized networks and troubleshoot and maintain support to innovation end users. IT workers are popular to help other people stay aware of ...